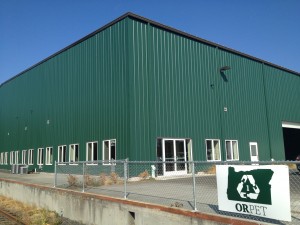 ORPET LLC is a joint venture formed by Pacific PET Recycling LLC and Oregon Beverage Recycling Cooperative to create a state-of-the-art PET recycling facility in St. Helens Oregon creating 50 new manufacturing jobs.  PET is a common acronym for polyethylene terephthalate which is the predominant material used in the construction of consumer packaging.  ORPET will pick up baled PET from the six regional collection facilities run and managed OBRC and process the material and convert it to washed PET flake that can be used in a wide variety applications.  These regional facilities are located in Portland, Eugene, Bend, Pendleton, Medford and Coos Bay.

In 2007, the Oregon State Legislature passed Senate Bill 707, updating the state’s historic 1972 Oregon Bottle Bill that instituted a five cent deposit-refund system for carbonated beverage containers sold in the state.  This new bill extended the five cent deposit to all water bottles.  The bill created the need for an organization to handle the redemption side of the system for the state representing the State’s distributors.  Several organizations were merged into the creation of “OBRC” which is a cooperative made up of 95% of the distributors in the state.  The cooperative has 200 employees and picks up redeemed bottles from over 3,000 retail locations.

Since water bottles are primarily made out of PET, the inclusion of water bottles dramatically increased the amount of PET in the redemption stream.  This considerable increase in the amount of PET bottles in the redemption stream necessitated new thinking for how to best recycle this particular material.  The current and expected volume is so signification that it justifies creating the Northwest’s first PET recycling facility.  This facility will process between 12 and 15 million pounds of plastic from its inception, and this stream will continue to grow as consumer awareness regarding deposits on water bottles takes hold.  Legislators may also consider adding products such as sports drinks and other PET packaged products in the future.  Currently all the redeemed plastic bottles are baled, loaded in shipping containers, and sent to Asia.